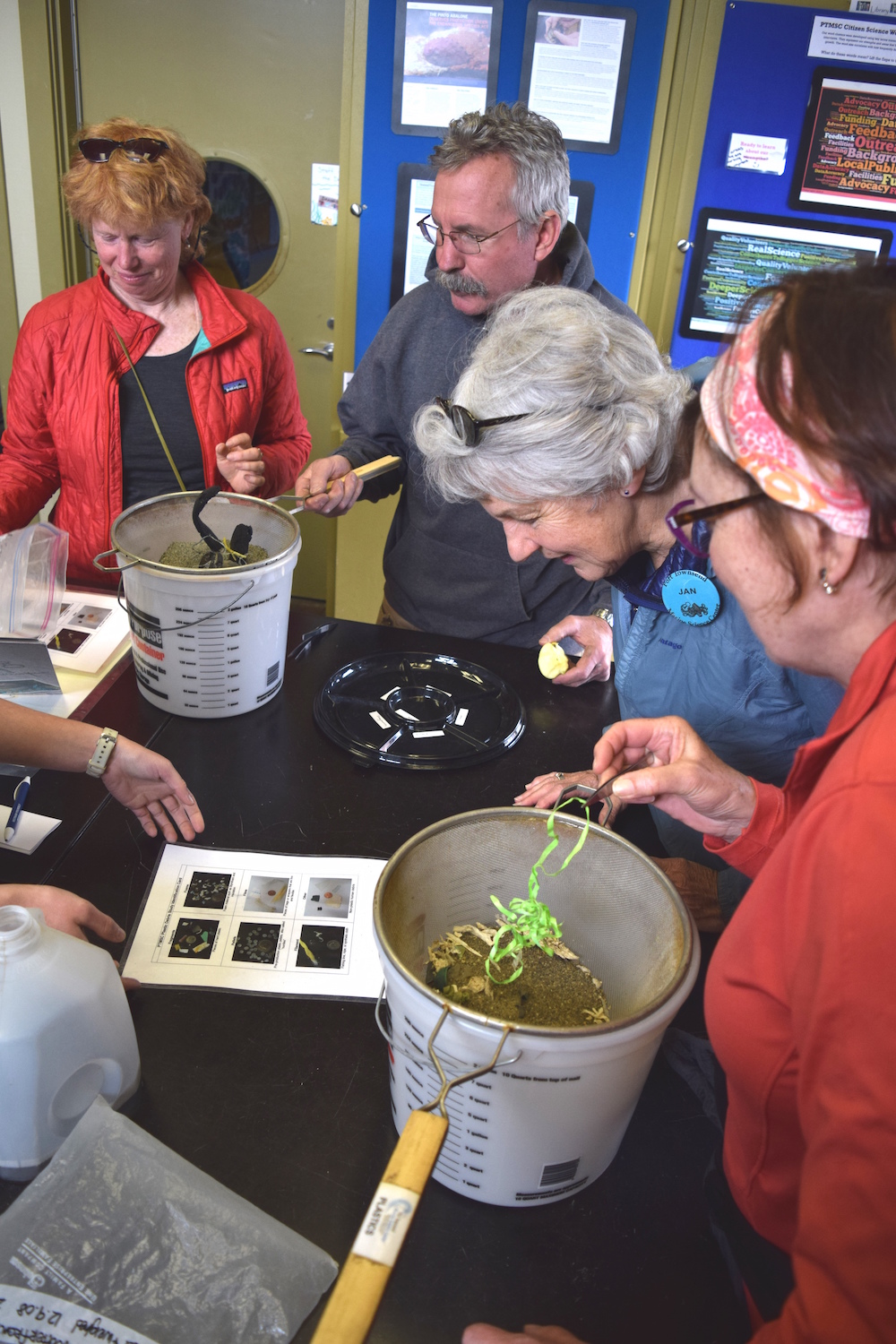 Abalone Project: PTMSC volunteers worked with the Puget Sound Restoration Fund on this outreach project. Volunteers monitored the health and growth of juvenile abalone living in “halfway houses” — the PTMSC floating dock and in the Discovery Lab tanks.

Dungeness Crab Larva Monitoring Project: PTMSC organized volunteers at multiple sites in Jefferson County to trap megalops larvae of Dungeness crabs, in a study carried out by the Suquamish Tribe on the origins and movements of crab larvae in Puget Sound and Hood Canal.

Ocean Genome Legacy Project: PTMSC staff and volunteers collected tissue samples from a variety of intertidal species and marine mammals. Tissues were analyzed for genomic information and filed in a genome bank – making the information available to researchers studying the decline of biodiversity in the marine environment.

Orca Project: Volunteers helped clean, measure, photograph, digitally scan and articulate (put together) a transient orca skeleton. This orca (CA 189) was found to have one of the highest levels of toxics ever recorded. The orca exhibit debuted on September 29, 2012 as part of a several new exhibits that focus on the presence of toxics in Puget Sound and the marine environment.

Plastics Ingestion Study: For four years, PTMSC collected data on plastic ingestion by Glaucous wing gulls on Protection Island. Volunteers dissected regurgitated boluses and characterized both diet and any plastics or other human-made contents. Read our peer-reviewed paper on this project.

Plastics in the Marine Environment: In this study led by PTMSC, volunteers sampled, sieved, and sorted sediments from beaches throughout Puget Sound and the NW Straits to determine the amount of plastic present on local beaches.

Project Budburst: PTMSC monitored a red elderberry tree outside the Natural History Exhibit's portico. Data was used to track phenology effects of climate change in micro and macro climates across the nation. PTMSC data is owned by PTMSC and was shared openly with Project BudBurst.

Purple Martin Project: PTMSC volunteers and visitors recorded observation data of our resident purple martin population from 2011 to 2014. They nest in 4 nesting boxes located on the pier at Ft. Worden. Data is owned and managed by PTMSC and shared openly with Admiralty Audubon. Currently the boxes are maintained by Admiralty Audubon.

Roof Runoff Study: PTMSC volunteers sampled 10 residential roofs in the Port Townsend area. Partners at the University of Washington Tacoma’s Center for Urban Waters analyzed samples for a panel of industrial chemicals known to be toxic to marine life. Data is owned and managed by PTMSC. RESULTS TEXT: A summary of results is available in our Spring 2015 Citizen Science Report (see page 4 and 5).

Salish Sea Hydrophone Network: PTMSC is one of five nodes in this Puget Sound-wide network of organizations using underwater microphones to monitor orcas. Data is collected by Orca Sound and is licensed through creative commons.

Sound Citizen Water Quality Monitoring — Volunteers have assisted researchers at University of Washington in an ongoing study that tracks the presence of cooking spices and toxins in Puget Sound, to investigate the connection between our urban landscapes and its marine waters.